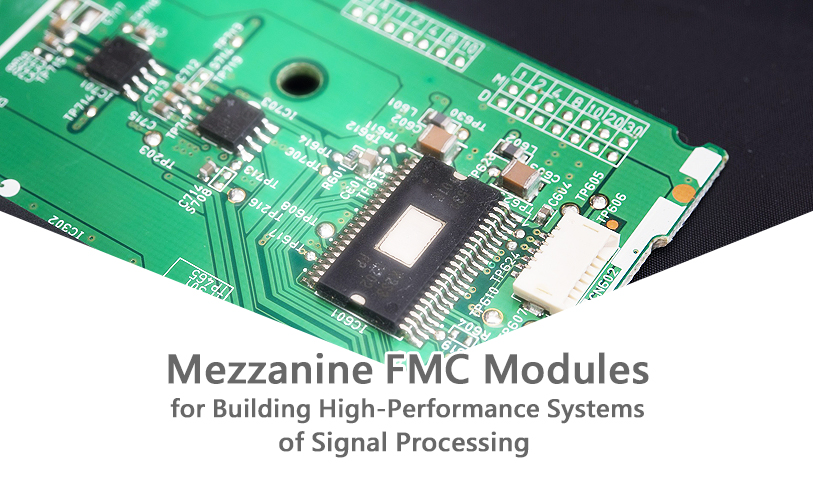 The Standard, Application, and Advantage of FMC Mezzanine Modules

The article gives a brief description of the FMC standard that defines mezzanine modules designed for operation with the FPGA-based boards. The examples are shown using FMC mezzanine and FPGA-based carrier boards implemented in in accordance with the CompactPCI Serial and OpenVPX standards.

Requirements and approaches to the implementation of the external I/O interface is one of the most challenging problems faced by the developers of embedded systems. Regardless of the interface nature: Ethernet with optical or "copper" physical data transmission channel: analog or gigabit serial interface, –system developers need an efficient set of tools for the creation of the required combination of interfaces within a computing system. One of the ways to solve this problem is the use of the two-component system consisting of the carrier-board with the processing unit and a mezzanine module designed for implementation of input/output of signals. This approach is properly standardized and includes several form-factors of mezzanine modules, such as PMC and XMC, and carriers in the designated implementation, where the devices in VME, VPX, CompactPCI, AdvancedTCA, MicroTCA, PCI, PXI form-factors are the most commonly used ones.
The interaction between the carrier-board and mezzanine PMC and XMC modules are based on the PCI and PCI Express buses, respectively.

The widespread use of the FPGA (Field-Programmable Gate Array) technology is yet more proof that the approach dividing the components of the embedded computing system into input / output devices and mathematical processing units was correct and made it possible evolving to the standardization of I/O modules. In 2008, the development of the cross-platform standard ANSI / VITA 57.1 FPGA Mezzanine Card (FMC) was completed. This standard defined design and physical interface of the module with the carrier board (connector type, set of signals, their physical characteristics and location on the connector’s contacts). The protocol of interaction of the module with the carrier-board standard is not limited due to the wide variety of possible types of input/output interfaces. This is what makes the FMC module standard truly cross-platform and applicable to any carrier-boards (Figure 1), unlike PMC and XMC.

In addition to the LVDS differential pairs, the standard stipulates serial high-speed transceiver and clock lanes for them, providing the bandwidth capacity up to 1 Gb/s (in the future - up to 10 Gb/s) for each (in which case, there could be up to up to 10 of such lines in HPC, but only one line in LPC).

In order to support a new class of data converters using the JESD204B serial interface instead of parallel LVDS, the FMC specification was improved to the FMC + specification.

This version, written in VITA 57.4, increases the number of serial transceiver lanes from 10 to 24, using a new high-speed version of the HPC connector with four more rows of contacts (HSPC connector). The new connector for FMC+ is designed for data transfer rates up to 28 Gb/s.

In addition to it, VITA 57.5 adds eight more Gigabit transceiver lanes to the FMC + module, increasing the length of the original FMC module by 12 mm to support the new 40-pin connector (HSPCe), as shown in the lower right corner in Figure 1. This increases the total number of full-duplex Gigabit serial (transceiver) lanes up to 32, which makes it possible to provide the maximum transfer rates of input/output data.

The FMC, unlike PMC and XMC, does not use standard industry interfaces, such as PCI or PCIe.

As an alternative, the FMC-module has a unique set of control and data transmission lines. Each of these lines is distinguished by signal level, quantity, bit depth and speed. At the clock frequency of 1 GHz, 80 differential data lines can provide 10 GB/s, although with the new FMC+ specification these values are doubled. The original FMC specification sets a target of 10 Gb/s for each of the ten transceiver lanes, providing a maximum overall data transfer rate of 10 GB/s. The new FMC+ specification with a bandwidth of 28 Gb/s with a maximum of 32 lines increases this maximum overall data transfer rate to 90 GB/s.

The mezzanine FMC modules have such input/output devices and primary signal processing units on them as ADC, DAC, DDC or interface transceivers. The exclusion of intermediate interface bridges enables you maximizing the data transfer bandwidth.

Further, the FMC technology makes it possible to significantly simplify the process of designing embedded systems and provides developers with a number of important advantages.

E.g. these mezzanine modules can be installed to the following FPGA-based carrier boards, implemented in accordance with the CompactPCI Serial and OpenVPX standards (Table 2) made by Perfectron.